skip to main | skip to sidebar

Watchtower by Elizabeth A. Lynn

I’d never heard of Elizabeth A. Lynn when I saw her name on the list, and it was a surprise to me that Watchtower, the first book in her Chronicles of Tornor had won the World Fantasy Award in 1980.

When I looked for some information on her I discovered that she was notable for being an early author to focus on lesbian and gay relationships in speculative fiction. There is actually a lesbian couple in Watchtower, but they’re not the main characters and their relationship is simply part of the story and not played up or sensationalised in any way, which I thought was very well done.

On the face of it Watchtower is a pretty standard tale of conquest and revenge, but it’s really more about a clash of cultures and the challenging of long held beliefs.

The story is quite simple. The small kingdom of Tornor is conquered by a brutal warlord called Col Istor, and the main character is a loyal captain or Tornor’s guard; Ryke. Ryke remains in Tornor to try and ensure that the prince Errel remains alive and possibly ascend to his father’s throne. Ryke and Errel flee Tornor and seek assistance from another kingdom. They learn that kingdom’s style of fighting and eventually return with an army to overthrow Istor and take back what is rightfully theirs.

It fit quite neatly into what people call ‘gritty’ fantasy these days, popularised by writers such as George R.R Martin, Joe Abercrombie and Glenn Cook to name three. It’s very low on magic, dealing more with the different cultures that make up the world and often examining Ryke’s reasons and motives. The brevity of the book (it’s not much over 200 pages) don’t allow for a lot of world building or even much character development. I found the characters very black and white and rather bland. It’s an easy enough read and rather predictable. It’s sequel (The Dancers of Arun), published in the same year was also nominated for a World Fantasy Award, and the final book (Northern Girl) came out in 1980. Despite the two sequels Watchtower is quite self contained and wraps all it’s storylines up, so there’s no need to read on.

A series that I did enjoy which also dealt with the issues of gay relationships in a fantasy setting was Mercedes Lackey’s Last Herald Mage trilogy, beginning with Magic’s Pawn. The theme of the hidden prince trying to regain his birthright was something that I saw pop up in Guy Gavriel Kay’s Tigana, and I also kept being reminded of Mark Lawrence’s Prince of Thorns with the bleakness of the book’s setting and situation.

Labels: elizabeth a. lynn, the chronicles of tornor, watchtower 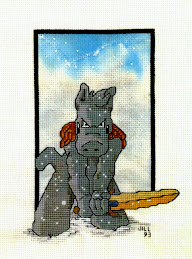 Elfy wants you to read his blog

Elfy
Melbourne, Victoria, Australia
I started reading in the womb and always wanted to grow up to be a Moomin and have adventures. When this proved impossible I decided to write them down.